The boss of Bolt Motorcycles is riding his latest build over 1,000 miles to a Czech brewery. It’s a long way to go for a beer, especially when the bike is a 250cc hardtail.

There is something about Andrew Almond that tells you he is very driven. The ambition for his motorcycle business, Bolt Motorcycles, is one sign of it. His idea to ride all the way to Prague and beyond on a custom built hard-tail Jawa CZ is another. It’s either that or he’s completely nuts.

Over a beer at the launch of the bike he’s built, he told me why he’s riding from London to the Czech Republic capital, then on to his ultimate destination, the Budweiser Budvar brewery in Budweis, South Bohemia. It’s a trip of over 1,000 miles. On a hardtail. With a 250cc engine.

“It’s a celebration of motorcycle/beer and counter-culture hubs, such as Rusty Gold café in Amsterdam,” says Andrew. “I’ll be hitting Amsterdam, Bruges and Prague, picking up other riders on the way, before heading through to Budweis.” All in six days.

If you’re not familiar with Budweiser Budvar, it’s the original beer from Budějovice, made from Saaz hops and brewed for 102 days and shouldn’t be confused with the American mass produced beer with a similar name, which is brewed in just seven hours. I have been a fan of Budvar for years and I’m not one to turn down a motorcycle adventure, but even I would baulk at riding over 1,000 miles in some discomfort for a beer. So why did he?

“I’ve ridden all over the world and have got a bit of a reputation for it. Out of the blue, an old school friend rang me up and we met up for a beer where he pitched me the idea of riding to Czech Republic on a custom bike, with the Budweiser Budvar brewery as the final destination. I liked the idea of taking a really ordinary Jawa and doing something special with it. So did Budvar, who were prepared to fund the build and the trip and so we were on.”

Bolt Motorcycles, remarkably still only four years old given its high profile in the retro-custom scene, is clearly the perfect vehicle for his restless creativity. “We make our own range of clothes, we build bikes to order for customers and also to our own ideas and we’ve created the store and workshop as a cool place to just hang out. Bikers need a destination, and that’s what we’ve become.

“I’ve also been quite involved in the art scene, putting on shows where we recapture the original motorcycle scene – some of the original rockers are now in their seventies and eighties and it’s important we don’t lose those that history.”

Talking about the shop itself Andrew says, “It’s all about the stuff I like, cool designers and makers, quality brands like Aero, Lewis Leathers and Hedon who just make really good, well-made gear.” He also designs the Bolt range of clothing. “I take older styles and give them a contemporary twist, so a traditional 50’s biker jacket will be slimmer and longer to bring it up-to-date.”

Sitting in pride of place at the centre of the store is Bolt’s Buell build, handcrafted in aluminium by Jake Robbins in Hastings. “The Buell sums up everything I want to do with Bolt,” says Andrew. “I wanted to take a big, fat American muscle bike, a really obscure bike that’s rarely used for custom bikes, and turn it into a cafe racer. Using Jake was great as he is more used to restoring Brough Superiors and for him it was a chance to be really creative.” The engine was upgraded to 1300cc, and a Vance and Hines exhaust added before Robbins’ handiwork was finished off with ornate beading work around the lights. It’s a typically Bolt result, an imposing blend of retro and contemporary. 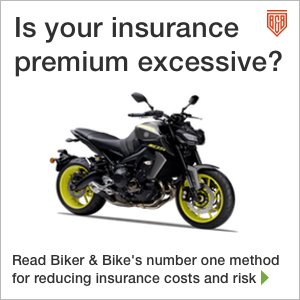 There is, however, no ‘Bolt look’. Their signature is instead about getting the form and function right – the geometry, the stance and also how the bike is going to work for the owner. “The first thing we ask when someone approaches us with a commission is how is the bike going to be used,” says Andrew. “Other builders are all about what shiny bits they can add to a bike but we treat a build more like creating a bespoke suit. There’s no point building something totally beautiful, but then it can’t be ridden.”

We then both look at the Jawa and burst into laughter at the thought of riding it 1,000 miles with no suspension. “That bike’s my exception to the rule!”

The Budvar Jawa so obviously bends his own rules and it’s all the better for it. For once, function was put to one side to take what was already a very functional, utilitarian bike and turn it into an object of desire.

Jawa mostly built small capacity bikes – the Budwar bike is based on an early 1980’s 250cc model, although the engine was a late 50’s early 60’s design. “There was no concept over there of sports bikes or tourers,” says Andrew. “It was literally a cheap, practical form of transport, typical of the Soviet era.”

Luckily, even though there aren’t many Jawas for sale in the UK, he found a model that would be easy to source parts for and he had a clear idea of what he wanted to create. The real challenge was the time. “We only had two weeks to do the build but we really wanted to get over the idea of craft as that’s what the beer is all about. That’s why there are so many hand-crafted features on the bike, from the hand-painted tank to the handmade seat. We had to bring so many artists together in such a short space of time.”

The result is beautiful, but it’s hard to think the same thing of the ride. When we met, it was at least a month until the ride itself but already Andrew’s eyebrows furrowed and lips pursed at the thought of so many miles on a hardtail. “We didn’t have any choice. Most Jawas are hardtails. The other option would have been a motocross bike, but there was not much we could do with a bike frame like that which could be different and you couldn’t throw any performance at it. Plus I liked the idea of turning this ugly duckling into something special.”

He’s certainly achieved that. Whether he’ll arrive in Prague with all his vertebrae still in place will be an entirely different achievement. One things for sure though: He’ll deserve a beer when he gets there.

Andrew will be riding to the Budweiser Budvar Brewery from the 6th August 2018. Tours of the brewery can be booked here: https://www.visitbudvar.cz/en/brewery-tours/

Andrew is also organising the Black Deer Festival, a celebration of Americana and country music with wholesome food & drink, artisan wares and custom-built motorcycles, just some of the things – in addition to the music – paying homage to the cultural heritage of America. Tickets are now available for 2019’s festival: https://blackdeerfestival.com/our-festival/

The excess insurance tip that saves you serious money