Tough enough to survive being ridden over, the Gear D watch is aimed directly at bikers. But why else would a biker want to wear one? We gave one to Jock to find out.

Occasionally we have products that pass through the office for review that have motorcycles in mind even if they aren’t solely for that use. A few weeks back, Gear D Hardware sent us their entry-level watch, The Rambo, to try out, for on and off the bike.

Gear D Hardware is an American company based out of Florida that doesn’t mince its words. In an age where watch sales, from cheap to luxury, are in decline due to the all-conquering smartphone, vigorous marketing is key. Five minutes into reading their website, and I was pumped and ready for action. Not sure what action, but if it came, I was ready.

I like the emotive language they use, the simple message they’re sending out; kind of ‘we design tough watches, are you tough enough for them?’

Looking at the website images and reading the hype, I’m going to say this watch, as all their watches are, is angled at the John Rambo’s amongst us (I’m guessing that’s where the name of this model comes from). The manufacturer pushes a lifestyle image of tough bikes, pumping iron and shooting guns. The first two I’m on side with, but here in the UK, you may want to chill out on the third.

Let’s be honest; a watch has always been a fashion accessory. From paupers to billionaires, a watch says something about you as a person that is hard to convey through the universal jeans and t-shirt look. And nothing says ‘tough, confident, assertive’ like a big tough watch. On my driveway, I genuinely rode my motorbike over the one we have on test.

Not because that’s the sort of thing I do by accident, no, it was intentional. I was so charged by the website claims of toughness, I wanted to give it a bash, so to speak. Ultimately it didn’t bash the watch, didn’t even scratch the face. And my 250kilo bike is fine, no damage done, thanks for asking.

So, the watch, apart from telling the time, what’s it all about? Well, each Gear D Hardware watch comes with a no-fuss, real-world lifetime warranty. The Rambo is made from stainless steel, has anti-scratch glass and is waterproof to 100 feet. It’s fitted with well-respected Miyota movement (part of the Citizen group) and has both an analogue and digital face, with a red on black design. There are plenty of choices, but our review model came with a faux carbon pattern with red stitching strap, which in itself feels as tough as the watch itself.

I normally wear a 46mm Samsung smartwatch, The Rambo is larger at 50mm and feels significantly heavier, meatier even. There are times when I forget whether I’m wearing my Samsung or not; this was not the case with The Rambo. If you like your watches noticeably chunky with weight, as well as being able to use it as a weapon to kill another human being, then The Rambo is more than up to that task. (If you look closely in the 1982 film, Rambo threw his Gear D Hardware watch at the helicopter, not some soft rock he randomly found on the ground).

As much as the watch looks and feels the part, I got to say there are a few negatives, unfortunately.

I don’t normally wear a watch when on the bike, relying on the dash clock, and when off the bike, my smartphone instead. I did wear The Rambo a couple of times though, to see how it felt. It didn’t work for me as I wear my gloves under the jacket cuffs. It was just too tight a squeeze to get the glove over the sizeable watch and then under the jacket cuff, to be comfortable — something to consider if you do the same.

More of an issue is the black and silver analogue hands on this model all too often blending into the dark background, making them hard to see in poor light and literally invisible in the dark. That would be fine if the digital backlight was stronger, but it’s barely effective in failing light, only being useful enough in the dark. And at certain times the analogue hands block the digital display anyway, making them even more difficult to read. At the point where the light around you is fading, this watch is lacking. I found myself all too often getting frustrated that I was wearing something that just misses on one of, if not the most important point of a watch, being able to see the time, 24hours a day.

My suggestion, fully make the hands a lighter colour than the background for daytime use, perhaps luminous for failing light, and the backlight on the digital readout much brighter.

The guys in the workshop at Motoworks in Kent used the test watch for a few days but found it was too large to wear when working on motorbikes. In fairness to the watch, not many bike technicians wear watches, they either get damaged by the bikes, damage the bikes, or get in the way if you’re trying to do anything intricate around the bike. Not all bikes have large enough spaces to fit hand, wrist and watch, certainly not one of this size. However, they did wear it away from the workplace and liked the design, acknowledging the slight failings with the actual watch face itself. As a fashion accessory, they gave it a strong thumbs-up, really liked the red on black and chunky image.

Given watches are more fashion than function these days, in part due to our multitasking smartphones, The Rambo as something you’d happily wear as a statement of what you’re about, is probably as much as the watch needs to achieve. For its few but relevant shortcomings, that’s certainly what this watch does.

Now, pumped, I’m off to the gym, but not before a tough bike photoshoot and tear up with the local police department.

The Rambo watch, along with the full range by Gear D Hardware is available at https://geardhardware.com/ 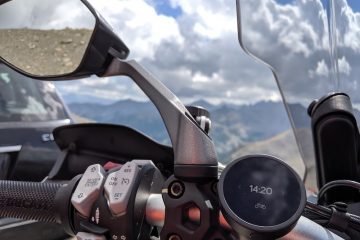