Filtering on your motorbike is legal in the UK but there are still laws around when you can and can’t filter.

Luckily, most car drivers in the UK now know that filtering by motorcycles is entirely legal. They’ve probably watched a police motorcyclist do it and then realised there is only one law and it applies to all of us.

Quite possibly the most boring video ever featured on Biker & Bike, here’s a police officer filtering.

Occasionally, though, you may come across some four-wheels neanderthal who isn’t quite up-to-speed on the legalities around filtering. So it pays to make sure you are up-to-speed yourself and where you can and can’t filter.

So what’s the law on motorbike’s filtering?

In 2006, a judge ruled in the case of Davis vs Shrogin that, “a filtering motorcyclist passing stationary or very slow-moving traffic could not be to blame if a collision occurred if the rider had no chance to take avoiding action.” 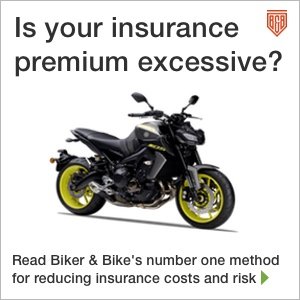 Checking the Highway Code, under Rules for Motorcyclists, Rule 88 states, ‘Manoeuvering. You should be aware of what is behind and to the sides before maneuvering. Look behind you; use mirrors if they are fitted. When in traffic queues look out for pedestrians crossing between vehicles and vehicles emerging from junctions or changing lanes. Position yourself so that drivers in front can see you in their mirrors. Additionally, when filtering in slow-moving traffic, take care and keep your speed low.’

Then in Rule 160, where the advice is aimed more at other vehicle drivers, it clarifies this with, ‘Once moving, you should be aware of other road users, especially cycles and motorcycles who may be filtering through the traffic. These are more difficult to see than larger vehicles and their riders are particularly vulnerable…’

So, it’s clear that the Highway Code has specific provisions that cover filtering.

It means, the next time a car or van driver gets a little antsy on the subject, you can respectfully shove their, “Shouldn’t even have been riding there, mate!” back down their throats with a “Highway Code, Rules 88 and 160. Mate.”

You are allowed to filter, and other road users (including yourself, remember) should be aware of motorcycles filtering.

That’s all straight then? Not quite

There are places where you certainly can’t filter legally: Crossing a solid white line, including into hatched areas bordered with a solid line.

And while you can filter past traffic queuing for a crossing, even in the zig-zag zone, you can’t pass the lead vehicle until it has passed the crossing.

You can filter legally in a cross-hatched area that is bordered by broken lines. However, the Highway Code’s Rule 130 is less clear about just how legal it is:

‘Areas of white diagonal stripes or chevrons painted on the road. These are to separate traffic lanes or to protect traffic turning right.

Note that they use ‘should not’ rather than ‘absolutely no way, matey’ in the first clause. When ‘must not’ is used, that’s when a rule becomes legally enforceable.

So that is a judgement call. We think however that it’s unlikely you’ll be called before a judge to argue the point, unless you’ve been a bit reckless with your speed or another judgement.

Don’t just go round yelling “Rule 88!” all the time. Take five minutes to read up on Filtering: Best practice

How to buy a crash helmet

Review: Low Rider – To Israel on a 70’s Triumph hardtail

Deal with target fixation and you’ll make your cornering quicker