Petrol stations that insist bikers remove their helmet before being allowed to fill up are putting the rider’s safety at risk. And then there’s the discrimination…

It’s been 10 years since MCN ran their campaign naming and shaming petrol stations that forced motorcyclists to remove their helmets before fuelling.

While still not a universal policy, many petrol stations, especially those in high crime areas, now insist it happens. It’s a natural response when thieves fill up and ride away without paying.

Some brands claim the issue isn’t about theft but age identity. The CoOp, for example, states:”We ask motorcyclists to remove their helmets at our filling stations as petrol is an age-restricted product.

“Our members of staff need to be able to confirm that the person buying it is over 16 years of age.” This is a condition of our Petroleum Licence and is consistent with other major fuel retailers.”

Most of the major petrol retailers give the same response when asked. But none are comfortable with the obvious follow-up question, ‘Why don’t you ask anyone else to do the same?’

There are no signs for customers wearing hoodies, baseball caps or other headwear that can obscure the face from CCTV cameras to remove their gear. Or people wearing large sunglasses?

Surely, if you need to identify the age of someone or capture their face for a potential prosecution, you need to do that with all customers, not just motorcyclists?

Discrimination aside, there is a more serious side to the story: motorcyclist’s safety. 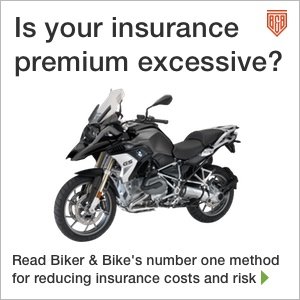 Greater risks without a helmet on

There are at least four and maybe over the longer term, five ways riders are put in danger, simply by having to remove their helmet when refuelling. You could almost read these out verbatim to the station manager so they get the message.

1. It’s rare, but fuel dripping onto a hot motorcycle exhaust has the potential to ignite. When filling with fuel, the rider’s head is often immediately over this area. Keeping a helmet on reduces the risk of serious burns to the face.

2. When a motorcycle rider fills a tank there can be a risk of petrol splashing back out of the tank under the pressure of fuel delivery. The rider’s face can be directly above this. Wearing a helmet reduces the risk of the petrol going into the rider’s eyes, nostrils or mouth.

3. Motorcycle helmet visors are at greater risk of ‘misting up’ when there are temperature changes. Misting happens when the rider’s warm breath hits the colder inside surface of the visor. When the rider keeps the helmet on the helmet interior, including the inside area of the visor, stays relatively constant because of the heat generated by the rider’s head. When the helmet is removed in damp weather and colder temperatures, the danger of misting increases significantly when it is put back on, reducing the rider’s visibility.

4. Motorcycle helmets must be correctly secured. By asking a rider to remove their helmet you are increasing the risk of them not remembering to do up their straps after fuelling. Any distraction, like an impatient driver honking their horn to get access to the pump, can easily lead a rider to do this.

5. Finally and obviously less easy to spot, petrol is a solvent and vapours can degrade the resins used in motorcycle helmets. Repeated exposure – a lid left near the tank when filling or even on top of the pump during regular fill ups – means degradation can build up over time and reduce the safety properties of the helmet.

It’s why we recommend you never leave your lid on your tank when the bike is parked up, especially in a confined environment like a garage or shed.

And then there’s the inconvenience

There’s always the potential theft of the rider’s helmet (and gloves) if they have, understandably, left the helmet on the bike when going off to pay.

On a cold day, the inconvenience of having to remove layers that include not just the helmet but also any thermal layer underneath are enough to piss anyone off.

And then there’s the issue of wet gloves. If it’s been raining and your gloves are wet we all know what a nightmare it is trying to get damp gloves back on.

None of which is even remotely on the mind of the manager or jobs worth who puts up the sign or harangues a rider over the tannoy.

Pay at the pump is one answer

It’s understandable that petrol stations want to protect themselves from theft. But putting bikers at risk of potential injury isn’t the way.

Individual stations that have serious problems with theft should install pay at pump facilities. It’s not just people on motorcycles or mopeds that steal petrol. Cashiers could insist on anyone they can’t identify – the burka, baseball cap and RayBan wearers – use the pay at pump facility.

The issue of asking motorcyclists to remove their helmet has existed pretty much since CCTV came into widespread use. There was a time when some companies, including BP, decided to withdraw the policy after pressure from riders.

It’s time for the industry to think again and put customer safety before the odd loss of a tank of fuel.

If you can, boycott and use another station, but not before you’ve told the manager why their policy is so misguided.