The Triumph Factory Tour and Triumph Visitor Experience bring to life the story of modern-day company and give you an insight into just how global the quintessentially British brand has become.

As an accidental owner of three Triumph Triples – somehow I’ve ended up with a T595, a Tiger 800 and a Speed Triple R all at the same time – I haven’t until now been a huge devotee of the brand. I’ve bought them simply because they are excellent bikes.

After a visit to the Triumph factory, which included a couple of hours in the Triumph Visitor Experience, I now have a far greater appreciation of what Triumph has been through, and become. And it’s given me a lot of love for and pride in the brand.

Triumph has a fascinating history. Founded by a German (who knew?) as a bicycle company in 1885, the first Triumph motorcycles started to appear in 1902 and by the end of the first World War the business had grown to become the largest manufacturer of motorcycles in the UK.

There followed boom and nearly bust years, with various owners coming and going, until property developer John Bloor bought the name and manufacturing rights to Triumph from receivers in 1982. It is this period of ownership, which has seen the marque explode into a truly global brand and business, that the Triumph Visitor Experience really brings to life, although fans of the older history of the brand are well catered for too.

If you are in the UK, the Triumph Visitor Experience is a great destination for a ride out. Located almost exactly in the middle of England, it’s a fairly easy reach for many, and some of the surrounding areas have superb biking roads, especially to the south in Warwickshire.

Entry to the Visitor Experience is free and you can easily spend a couple of hours there and still not have time to read every display’s description. The exhibits are a mix of current models and historic examples. The bike Steve McQueen used in The Great Escape is here, along with expedition bikes that have travelled across the Sahara, iconic race-winning bikes and some very trick modern custom builds. Plus, the very first Triumph motorcycle… 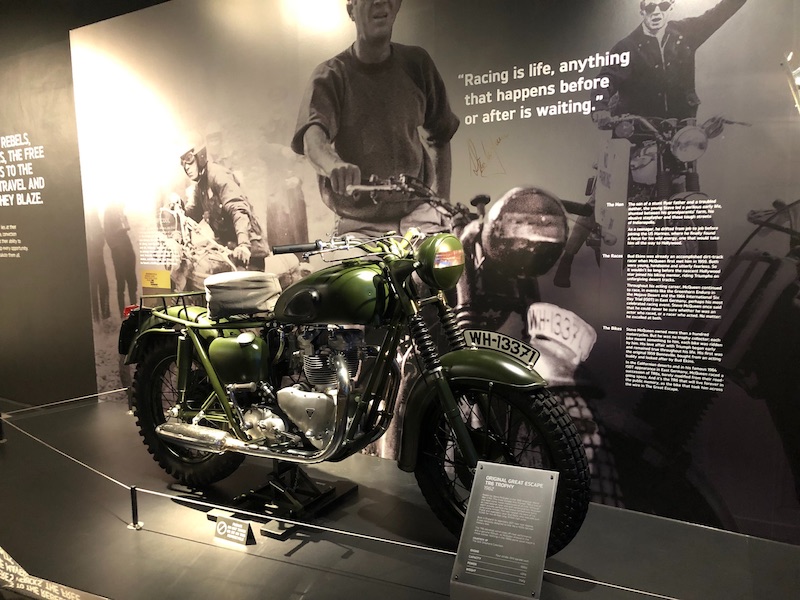 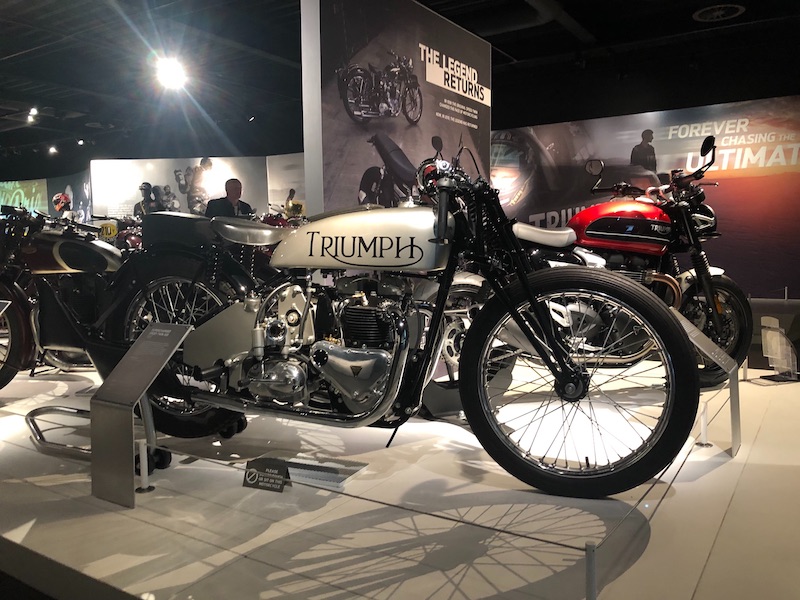 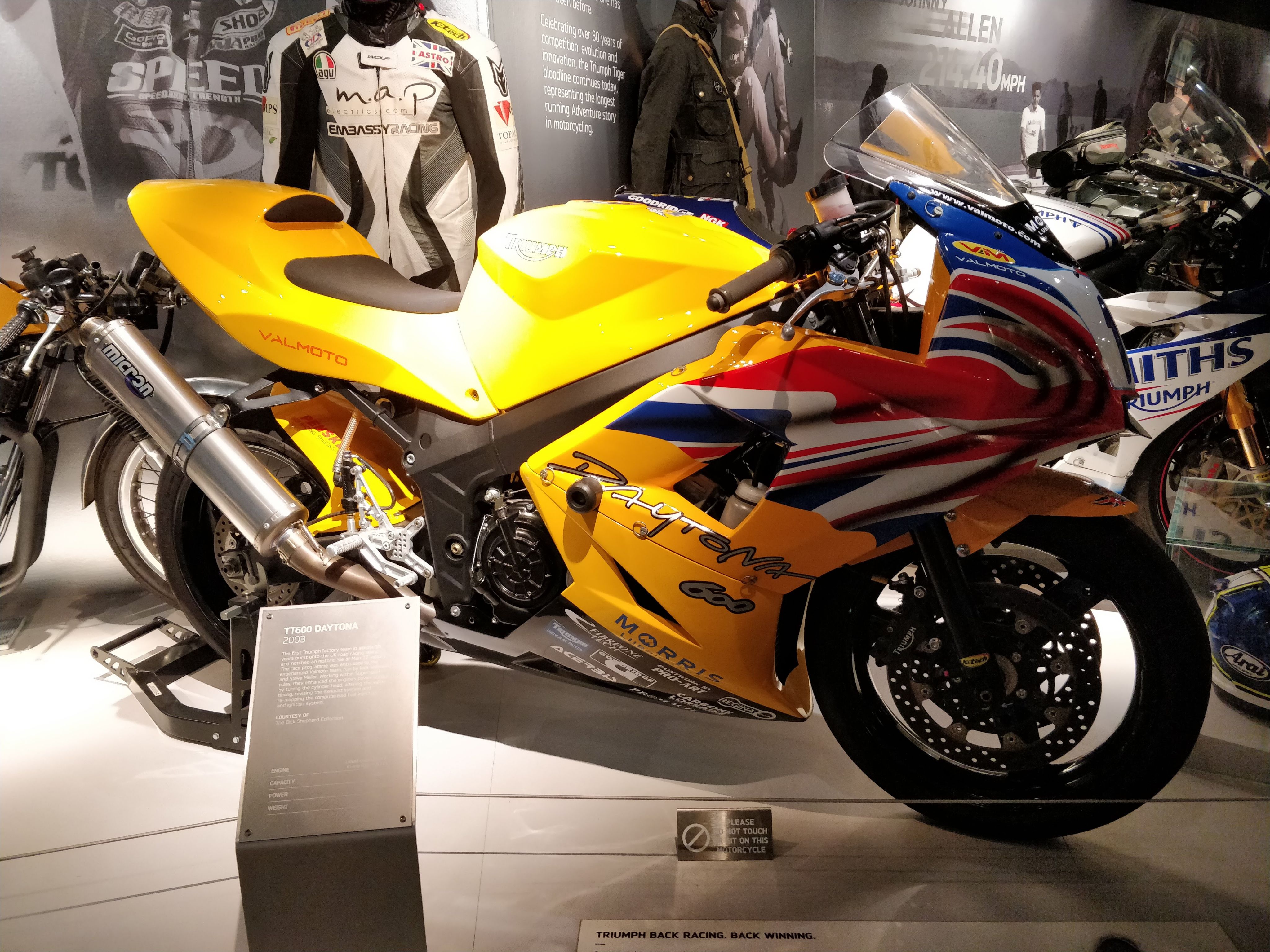 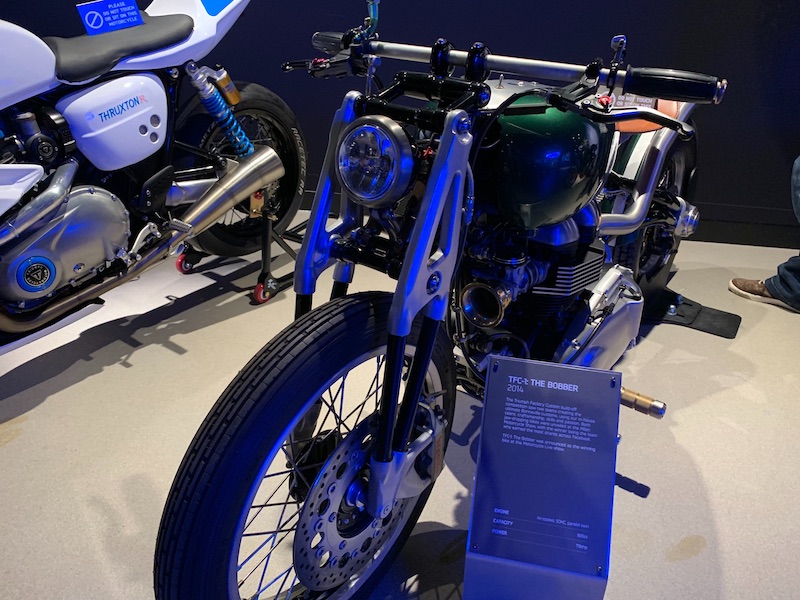 As well as the bikes, other displays feature engaging explanations of the engineering and technology, including insights on the development that happens between model updates. You’ll also get insights into how the bikes are tested, a subject that comes up on the Factory Tour too.

If you only have a few hours, 90 minutes in the free Triumph Visitor Experience plus a snack or lunch in the onsite 1902 cafe makes it well worth the trip.

With more hours in hand and £20 to hand over, the Triumph Factory Tour makes the trip even better. For me, it wasn’t until we entered the factory area that I truly started to appreciate exactly what Triumph has become under the stewardship of John Bloor and his son Nick.

Unfortunately, we can’t show you what we saw, as phones and cameras have to be handed in at the start of the tour. The handover is done next to a map of the world which, more than anything else during the day, showed me just how impressive the ‘new’ Triumph company is. I say new because, compared to the days under the ownership of the likes of BSA and Manganese Bronze Holdings, Triumph really is a completely new company. One that is clearly better managed, better financed, better branded and where the products are arguably better built.

The map shows Triumph’s locations across the world, and what drew my eye were the seven ‘factories’. Not all are really factories in the truest sense – the three Thai manufacturing plants produce around 80% of a Triumph bike with Hinkley producing key items like crankshafts and camshafts. The rest are assembly plants for local markets like South America. Whatever you want to call them, the map is a true indicator of the size of Triumph’s success.

The tour should take around an hour and a half but, such was the enthusiasm of the tour guide, our journey took us around the assembly lines, paint shops and testing areas for well over two hours.

Along the way we learned a fair amount about the manufacturing process, especially the tolerances the parts and components are built to, with some fascinating stats around the equipment that is used to test them. As a Triumph owner, it helped me understand why my Triumphs are so much better built than many other bikes I’ve owned. It’s this slavish pursuit of quality, plus finely-honed design and marketing skills, that is the real story behind the success of the new Triumph brand. You have to pay for it, but at least I now know where the money goes, and it appears to be nearly all put back into the continual development of the business. Remarkably, Triumph is still entirely owned by the Bloor family.

Predictably, we weren’t shown around the future of Triumph, the R&D areas. They take up a fair percentage of the factory’s floor space and, as the almost continual press launches and scoops on new bikes demonstrate, the people behind the R&D walls are clearly very industrious. We did however get to see a few unusual bikes at the end of tour, including a ski-bike – an Explorer with a large ski in place of the front wheel. In a beautiful one-off mica blue colour I’d hope to see on a production bike sometime soon; hint, hint, Triumph…

Tour over, another £5 was well spent on cake and a brew back in the 1902 Cafe, in readiness for the ride home. I could easily have put a couple of noughts on the end of that fiver, as there is also a Triumph shop in the building, stuffed full of quality clothing, luggage and accessories.

Verdict: Plenty to see and lots to take in. I’ve left it until the very end to get the pun in, but it’s clear from the visit that Triumph is now a triumph of design, engineering and manufacturing processes. All beautifully packaged into a very desirable brand as the Visitor Experience and Triumph Factory Tour amply prove. I’m now a fan of the brand, as well as the bikes.

The Triumph Visitor Experience is free and does not require booking. The Triumph Factory Tour currently costs £20 and is very popular so you are advised to book in advance at https://www.triumphmotorcycles.co.uk/visitor-experience/factory-tour. Both attractions are open year-round, but check the website for closing days on public holidays.

Biker & Bike travelled with the London Motorcycle Riders Club and we extend our thanks to the following members of the club who have allowed the use of their photographs from the day: Joe Bacon, Eric and Ruben Braz.