If watching Captain America tearing around a dirt track on a Monkey bike sounds like fun, imagine doing it yourself. We spoke to Shaun Isaac, founder of the Nifty Fifty Endurance Championship, on how easy it is to get involved in one of motor racing’s daftest sports.

The idea is simple: Get a bunch of four-man teams to ride mopeds (and scooters up to 90cc) around a dirt track for five hours and see who wins. If the teams are wearing wedding dresses or dressed as bananas, they can win extra points towards a championship. There’s none of that celebrity riders and huge race truck malarkey. And because there isn’t, moped endurance racing sounds like the perfect and most pure form of motorsport fun there is.

Shaun Isaac knows this and is perhaps not surprised that a single race he held, to raise money for Cancer Research after losing his mother to the disease, has turned into the Nifty Fifty series in just four years. “It’s such a laugh watching the teams struggle around the track on what is an ill-fitting and quite inept machine.

“Watching them try to get around a full motocross track for five hours is something special to see, and a lot of teams will wear fancy dress outfits. The effort to keep these machines running for the duration is quite arduous but, the grins and laughter from those taking part tell the real story. Each rider buzzes with excitement as they wobble and bounce around.”

Entering a bike in an endurance race is incredibly cheap. Nifty Fifty entry is just £110 per four-man team. Shaun reckons you can put a bike together for under £100. “A look through the likes of eBay, Gumtree, or even local motorcycle dealers can throw up bargain machines which can be picked up for less than £100, especially if they are non-runners, cosmetically damaged or written off. Bear in mind most teams will strip off the bodywork and strengthen the frames so are not looking for something with beauty! Throw in the price of some number boards, fuel, maybe a change to off-road tyres and a team sharing the costs means that it doesn’t add up to a lot of money.”

Although you can pretty much just turn up and ride, the key to championship success is remembering this is endurance racing. Says Shaun, “Some teams go to great lengths with preparation especially if they are thinking of collecting points for the Championship. And that’s the key – preparation, preparation and preparation! I have often been heard to say ‘Don’t aim to win, aim to finish as the win just might come.’”

Win or not, the biggest factor in all of this is clearly fun. “What is evident throughout the day is the camaraderie between all the teams.” Says Shaun. “Each team can be seen laughing with other teams and helping each other out with technical issues and repairs. They all have a common goal on the day, and that is to have fun.”

To make it more fun, most organisers of races encourage the teams to ride in fancy dress, and Shaun is no exception. “I ask the track staff to vote for the best fancy dressed team. The team that wins their voting is awarded an extra 5 Championship points and they also will be given a trophy for their efforts. Some of the more memorable entries have seen us witnessing a team leading their class while dressed up in full bridal gowns, another was a team who had dressed their machine up as a race-horse and they were wearing Jockey outfits. We’ve had Minions, superheroes, Armed Forces costumes, in fact, there’s probably not a lot that we’ve not seen!”

As well as the fun aspect, for Shaun, a big part of the motivation for creating and running the events is the charity side. “Afterwards, during the trophy presentations, I’m present with lots of laughing riders, each telling tales of their own “daring doo’s”. Also, you get to hear why they have chosen to take part, often with hard-hitting stories similar to my own personal experience and also they tell me how much they have raised for their charity.”

If you’d like to take part in a moped race, read more at the links below. 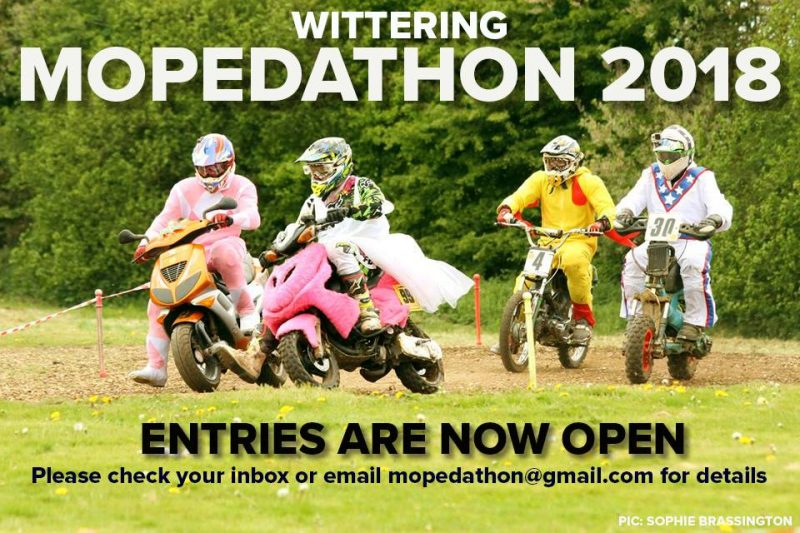 Only 0.28% of moped-enabled crimes result in a police pursuit