For Harley and other cruiser owners, the Sturgis Motorcycle Rally is probably the greatest motorcycling event on the planet. Its Midwest location makes ’Sturgis’ a great destination for a long-distance trip in the US. Californian Harley owner Chris Ward takes us through his bucket list trip of a lifetime.

Held just once a year in the hills of South Dakota, the Sturgis Motorcycle Rally draws thousands of bikes and visitors to its contests, food stands, bars, bikes and more.

I had friends who had been in previous years tell me that the rally was like no other. I’ve been to quite a few bike rallies and hearing so much about it had long put it at the top of my list of things I wanted to do in my lifetime.

The Ride Was More Than I Planned

I had quite a ride ahead of me going from California to South Dakota, and it took a while for me to prepare for the long ride alone.  Taking off from my office at in Aptos, California, I had my entire trip mapped out down to the last minute.

But with such a long ride I figured it would be a bit boring since I was riding alone and had more than 1500 long miles to ride. While I had everything carefully planned, I worried that once I hit Nevada and Utah there wouldn’t be much to see or very many nice views to take in and possibly very few places to stop along the way. I was wrong!

Maybe it’s a ‘Sturgis thing’ but I met some truly great people along the way including a bunch of riders that I ran across in the middle of Nevada. Those guys rode with me for at least 10 hours of the ride and the bond we shared heading to Sturgis is one that I feel will last for many years.

Instead of taking a straight ride to Sturgis as I had planned before leaving Aptos, we detoured a little and headed to Yellowstone National Park for a day and spent time cruising down the Beartooth Highway for a few hours. It’s amazing how close you can feel to others when you share a ride like this. These guys weren’t just weekend warriors, they were the wild ones that lived to ride and would have your back in a heartbeat in any given situation. Brotherly love, that’s what I found on my ride to Sturgis.

Much More Than a Rally

Even a 5K and racing events are ongoing throughout this multiple day event. I don’t run, but hey, it was great to see so many people excited about a foot race! Don’t have a bike? No problem, if you’re lucky you can always hitch a ride with a local and see all that there is to see while cruising around the event premises. I met a great gal who wanted to ride a Harley and we spent a few hours checking the sights out.

Who would have known that some of the best concerts happen during this rally? From the ground up, you can see local performers, those trying to make it big and even some large headliner acts that you’re going to be sure you want to see.

To give you some idea of just how much there is to do at Sturgis, here are the events for just one day!

I knew there was going to be live music throughout Sturgis, but I never expected to see some of my favorites like Lynard Skynard, the Doobie Brothers and even Night Ranger! Bands and other musicians I hadn’t heard in years seemed to pop up at various stages all week long. It was incredible!

The bars are great

Local bars open their doors, so you can ride through the small town and hop to each and every one of them. I can’t review all of them for you, just know that the following two are typical of what you’ll find.

One-Eyed Jacks Saloon had some great music playing and I spent a couple hours watching a band and eating some of the hottest wings I’ve ever had in my life. I don’t know what they put in the Jacks hot sauce, but if you try them, be ready for some burn!

Jambonz Grill and Pub, oddly enough, had a full menu of Southern cooked foods. I had never tried fried green tomatoes before, but I can now attest to the fact that they are seriously delicious! If you make it to Sturgis, those are two places I highly recommend you check out while there.

It’s all about the bikes

Then, of course, there are the bikes. It’s what the Sturgis Motorcycle Rally is all about, really. There are thousands of them to stare at, to talk to their owners about and generally just to love being around.

What’s more, you get to ride with them and a number of planned rides, many of which raise money for charity. These are the main ones.

Annual Mayor’s Ride
One of the premier attractions of the Sturgis Motorcycle Rally begins at Riders Motorcycle Expo on Lazelle, through the beautiful Black Hills, finally finishing up at Custer State Park.

BozBros Benefit Ride
Starts at the Sturgis Dragway, with each participant able to take a run down the dragstrip before heading off on the 50 mile ride through the Black Hills plus free burgers and beer, and a free swag bag.

The Good Ride
Tear down the track at the Sturgis Dragway before heading off on a tour of the Black Hills.

The magic of this awesome rally happens each year in early August. You should definitely be a part of something so big – at least once. If you’ve never made the trip before, now is the best time to add Sturgis to your bucket list and get planning the trip of a lifetime. Believe me, it really is!
Advertisement

Get yourself to Sturgis:

To get a flavour of what the Sturgis Motorcycle Rally has to offer:  http://www.flickr.com/search/?text=sturgis%20motorcycle%20rally

For more information on the event itself, visit the Sturgis website at http://sturgismotorcyclerally.com/

The event is also on social media:

Camping is one of the favoured and cheapest ways to sleep while at Sturgis. To find the best campgrounds in the area, check this link: http://www.sturgiscampgrounds.com/

You can also find some really nice, as well as affordable hotels and motels during your time at Sturgis. http://sturgis.com/content/lodgingdining/hotels-motels.html

Chris Ward runs A1 Auto Transport in Aptos California, shipping motorcycles and cars around the US and from the States to across the world.

If you have a bucket list trip that could inspire other bikers to get on thier bikes, please contact us to make a contribution. 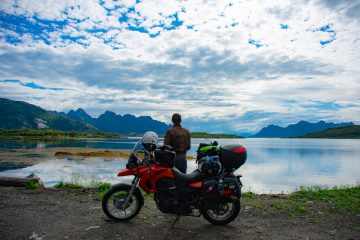 Dash cam footage speeding prosecutions could be about to happen