The UK is seeing a rise in motorbike jacking where lone bikers are losing their motorbikes to jackers.

As you’ll see in this video, bike-jacking is now very real in the UK.

This isn’t an article we’ve enjoyed writing, but we feel strongly that, especially in the larger cities, bikers who may be vulnerable to attack need to be prepared and know how to act.

There are a number of methods we know about that you need to look out for.

The first involves creating a disturbance or putting an obstacle in your path.

In a video now withdrawn from YouTube, a biker only just has time to realise that, while he’s doing the right thing and clearing the road of a dangerous item – a bicycle that had been thrown in the roadway – three thieves are in the process of taking his bike – he’s left it further back up the carriageway. With the keys still in the ignition.

In that scenario, it’s obviously difficult to know how to act, but one takeaway is that if you leave the bike, for whatever reason, including refuelling, take the keys out and live the bike with the steering lock on. Always.

The extra 30 seconds it will take them to bust the steering lock could be the time that saves your bike.

In the video below, all it took was weird behaviour by a passerby to distract the rider.

The second method involves a number of scooters. We spoke to ‘Dave’ (who wishes to remain anonymous for reasons that will become clear) who had put head-cam footage up on social media of an attempt to bike-jack him.

Dave was on his regular run home in South East London, on his Bandit. He’d already noticed a couple of scooters following for some time and knew what kind of people could be on board.

“I’d pulled into the right-hand lane, sitting back from the cycle box, when one scooter pulled in front, a youth jumped off and made to hit the kill switch [a technique designed to distract you before they push you off the bike].

I have lever guards and it made it difficult for the guy to get at the switch. He then noticed I’d got a Go-pro so he backed off and got back a bit.”

It gave Dave the chance to squeeze past the blocking bike, run the red try and get away. “They followed me and I had no choice but to push it to way above the speed limit. I had to run another red light too.”

After about 1 minute the bike thieves gave up. We can’t show you the footage as, worried about the consequences of riding at 60–70mph in a built up area, Dave has now deleted the video.

He has since seen the same guys in his area and they have reportedly been responsible for muggings in the Crystal Palace area of South London.

What can you do in this scenario?

Be extra vigilant in areas when you know there is a high chance of coming into contact with these gangs. You may have seen them on your regular commute.

Keep your eyes out for two scooters/bikes within a couple of hundred yards of each other, where at least one of them has a pillion. If you do feel the warning signs are there, without losing your focus on the road, make sure you know where both bikes are at all times, especially if one looks like it could come in front of you and the other bike, especially if it has a pillion, is staying behind.

If they do come at you to the point where you can’t move the bike, quickly put the side stand down so you don’t have to worry about balancing your bike and quickly put one hand over the kill switch and the other over your ignition keys. Remove them and pocket them if you have time. This will be a clear signal to the thieves that you know what you are dealing with. Hopefully, they’ll back off.

If they choose to follow you, or they haven’t struck yet but you think they might, head towards a busy area. A bus stop with a queue would be good, not just for witnesses, but for help too. Again, sidestand down, keys out and in a pocket – this makes it too difficult for them to steal the bike quickly.

If they become aggressive and threaten you with injury, we know it hurts but no matter how much you might love your bike or be angry about the situation, your safety is paramount. Back down.

Don’t put up a struggle, these guys can be carrying weapons. This is from a post in a London-based group: “One of the geezers came at me and used a construction hammer and hammered me to the ground as I was trying to get up. Well, I tried to pull my bike down and again I was hammered. At that point, the driver of the other moped came at my with a knife. At that point’ I backed off and let them take the bike.”

Don’t be tempted to try and turn the tables and chase them. If they run for home, to an area where they are more likely to know people than you, you could quickly find yourself outnumbered and in real trouble.

Is there anything you can do to stop the attack?

Let’s be clear, any form of retaliation by you could result in escalating the situation.

But it’s hard to just step away and watch your bike being stolen.

You can’t carry any form of weapon yourself, not even in self-defence. That includes pepper spray. But we have found something similar to pepper spray that will give you enough time to disable an attack and hopefully get away.

The Self Defence Spray Identifier above does not contain any tear gas or pepper spray so is legal to use. It covers an assailant in a red dye that stains the skin and clothing for up to seven days.

Its red colour confuses an attacker when they see what they think is blood when they wipe their eyes. It has a 3m range and comes in a small can that is easy and quick to activate. The only issue is where to keep it on the bike so that you can easily get at it.

Dave has a final piece of advice. “I normally carry my smartphone in my tank bag, along with my house keys. If they had taken the bike I would literally have been left with nothing. I now carry my phone in my pocket, so at least I’ll have that. At least I’ll be able to call for help.”

Make sure you are sorted:

It’s too easy to ride without checking your mirrors. They could be bike savers if you spot a situation soon enough so that you can put an evasion plan in place.

Even if you end up at a bus stop or petrol station and the situation turns out to have been nothing, it’s better to have the peace-of-mind. Think of it as training for the time when it might actually happen.

If you travel through a higher risk area, like SE London, and you are seriously concerned, you may want to invest in the spray. 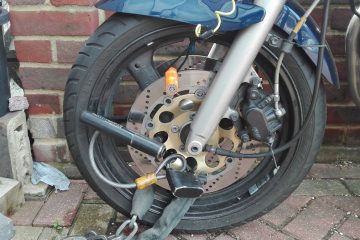 There is no more story.