We know lugging a 15kg chain isn’t practical when you are on the move. So what else can you protect your bike with, especially when commuting, when time and storage issues mean you need to keep things light?* Our motorbike security advice article helps explode, literally, any myths and guide you through the pitfalls.

Why not just save money and use an ordinary padlock?

The video below shows how a padlock can be broken in seconds simply with a couple of spanners, not even a bolt cutter. The same technique works with the bigger padlocks too, if you’re thinking the example lock is a little weedy.

There are numerous ways of opening a D-lock without a key. On some models all that’s needed is a biro pen… On others, some ice-spray and a hammer will do the job in seconds. Bolt croppers and even small portable bottle jacks are also used to break the locks open.

How to Break a Masterlock U-Lock bicycle lock

Even the majority of more expensive D-locks, even with Sold Secure status, can be broken in under a minute using a portable angle grinder. When asked in the video below if thieves will use an angle grinder in broad daylight, the thief’s response is “Who’s going to come near you when you’re using one of these?”

CHEAPEST WAY TO BREAK A U-LOCK

There’s no finesse in motorcycle theft. This is not about picking locks. Speed is paramount, and that most often means brute force in the form of bolt croppers and portable angle grinders.The thief will quite happily damage much of the bike, including £200-400’s worth of ignition barrel repairs, to get at the thousands of pounds worth of parts that the bike represents.

How secure is your bicycle lock?

Top of most people’s lists are disc locks (they stop the wheel from being turned when the lock attached to the disc comes into contact with the brake calliper and forks).

A cheap disc lock isn’t going to give you that much more protection than the other types of lock already mentioned. Cheap locks that can be broken in seconds and are practically not worth bothering with – apply equally to disc locks, no matter how solid/secure they might feel in the hand.

(Video)
Attacked with an angle grinder as pedestrians walk by.

Angle grinders may seem like an extreme attack tool, but they are in common use by bike thieves who use them to cut through the brake disc itself, bypassing the lock. It’s more likely that a cheap lock will simply be kicked off the wheel with a few heavy blows.

It’s also worth considering using two locks. The guys below have simply lifted the front end (the most favourite wheel to attach you lock to as it’s normally easier). Instead of a trolley, most gangs will simply use a thief for each side of the handle bars and wheel the bike away.

If possible, get a disc lock that can also be used with your rear sprocket – we’ve stopped using them on front discs pretty much altogether, as cutting through a chain and sprocket is more difficult than a disc.

If you already have a disc lock that can’t be used with the sprocket, consider getting a short shackle lock which exposes as little of the shackle as possible. If you accept that the really determined thief is going to the bike whatever lock you use, then portable trackers could give you some chance of getting the bike back.

Portable bike trackers are cheap and quicker to deploy that fitted trackers but they are possibly less secure – all the places you’ll think to hide them, the bike thieves will have thought about too. Proper fitted installation should always be under the bike’s airbox. You may not want to get down that far into the bike’s innards. You could go for under the tank. Under seats or the rear tray are the first places a thief will look…

If fitted under the tank, which is really easy to do, then replace ordinary Allen bolts with security bolts, which the thieves may not be carrying. It could buy you an extra couple hours to detect the bike before its stripped down.

Are lightweight chains even worth considering?

The lightweight chains are made from a composite material to keep weight down. Then can be broken either with a bolt cropper or a steel wedge in seconds. Unless you have a top box, they are not as convenient to carry either. We’d also assume that a cheap chain comes with a cheap lock, which will be equally easy to attack and defeat.

If a good quality disc lock is what you are going to use, make sure you have a way to carry the lock easily – preferably on the bike and not your person in case you come off in an accident, where a disc lock in a jacket pocket could lead to broken ribs.

When it comes to fitting on the wheel, assuming you are going for the front wheel, use the side that leaning down towards the road – the left side as you look at the front of the bike. This is harder for the bike thief to get at with a kick.

Two high-quality disc locks are the way to go, plus a tracker, preferably fixed and properly installed, if you can afford it.

*Major caveat time… The only true deterrent for a thief is time (even visibility no longer worries some thieves, stealing bikes from motorcycle parking bays in daytime, in full view of passersby). The longer it takes a thief to bust your security devices, the less likely they are to go through an attack. Hence the rise in bike jackings, when the bike has no security apart from the rider.
To buy that time, you need a chain and lock that will take at least five minutes under attack from an angle grinder. The point of the article is that it normally isn’t practical to carry around 15-20kgs of security kit, so we are looking at what else can you do to protect your motorbike. 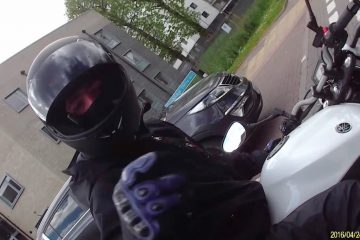 What made me want to ride all the way to Australia?